admin Posted on November 23, 2015 Posted in grants, news
Stanton Drew School and the Pensford, Publow and Stantons Community Trust (PPSCT) are hoping to boost playground facilities at Stanton Drew Primary School.
New Headteacher at the school, Dieter Cook, has already started the ball rolling on improving the school playground facilities and consultation has started with the children.
The PPSCT Trustees have confirmed that providing funds ( which would otherwise be unavailable from normal school budgets) to maximise the quality of a relatively small playground would certainly benefit the local community and help boost the school facilities, enhancing the popularity of this small village school.
Judith Chubb Whittle, Trustee said, “The Community Trust are really delighted to be working with Dieter and all at the primary school to help improve the playground facilities for the children. Some of the trustees have had a long association with the school, as parents and governors over the years and appreciate how well loved the school is and what a vital asset it is to the community.”
Headteacher, Mr Cook, said: “We are extremely grateful – it was Sue Osborne (governor) who pointed me in the right direction. Nothing is decided yet, but Stanton Drew is an excellent school and if we can find a way to upgrade the playground and play facilities, we will! Potentially it’s the sort of project that just would not be possible without the support of the Trust.”
Asked how long the children had been involved in the plans and what did he think of their ideas, Mr Cook said: “We have had various conversations and Mr Marriott ( deputy head) has led some work with the older children , gathering their ideas. I also gave the children a questionnaire in September – and there was a large number of children who identified the playground space and the way it was used as the ‘one thing’ that they would change about the school!” 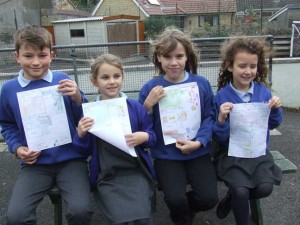 Asked how they would like to improve the playground, he said; “We are still open to ideas from staff and children as well as ‘outside’ professional playground companies. Essentially it’s a small space that is used well and it’s about exploring some other options and varying the type of play that children experience. The surface of the lower playground is poor and we will be looking into what options are available and at what cost. Trustee, Sue Osborne, said: “The project is at a very early stage – watch this space.”

Words and Image by Ros Anstey