On Sunday 26th November, The Carpenters Arms at Stanton Wick, was alive with optimistic members of the PPSCT 100 Club hoping for a big win at the fifth Annual Draw.

The event was hosted by the Committee members, Phil Townshend, Clarke Osborne, Ken “the balls” Payne and Sue Osborne. They were joined by Andy Marriott, Deputy Head at the Stanton Drew Primary School (part of the Bishop Sutton federation), who had accepted an invitation to draw the lucky balls!

Phil Townshend explained, “this is no ordinary 100 Club! Community minded residents from the Community Trust villages and friends from adjoining villages pay £20 per month. Each month there is a draw with prizes totally £600, but tonight is the eagerly awaited Annual Draw with staggering prizes of £ and £. Naturally, everyone is keen to know who wins”.

Whilst tension was mounting, Andrew Hillman, Chair of the Community Trust, thanked everyone for their continued support. He went on to say, “the 100 Club has become an inspirational organisation, it’s truly staggering to think that a group of residents, over a period of 5 years, by their membership, are within touching distance of raising a massive £50K for good causes across the member villages”

Andrew went on to mention some of the beneficiaries, “Pensford tennis court resurfacing, the Acker Bilk memorial bench, investment in the Stanton Drew Sportsfield premises and grounds mower, Stanton Drew fixed playground equipment and Pensford finger posts refurbishment project. Work to Pensford and Stanton Drew bell towers and Pensford playground investment is due during 2018 to name but a few. The Community Trust is very alive and kicking to support community projects”.

Before moving to drawing the lucky balls, Andy Marriott went on to thank everyone for the generous grant SD School had received during 2016 and explained how the adventure apparatus it had funded had enlivened with imaginative play an otherwise small uninteresting play area. 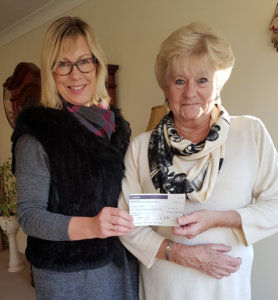 Over the years, it has become a tradition to have a “Booby Prize”. Entry is restricted to anyone who hasn’t won a prize since becoming a member, and they must be at the draw. Sue Osborne explained, “this isn’t an ordinary prize, it is a selection of very nice wines, the “booby” element is simply the giant golden money that is hidden among the bottles”.

Andy Marriott drew the final ball, and Simon Parker was at long last a lucky winner.

Sue Osborne continued, “we do feel for members who have not yet been lucky. There are one or two who have become well known for not winning, 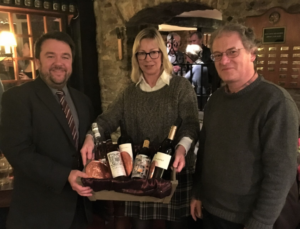 and that includes 2 committee members and my neighbour Bob Wright, who is often on the receiving end of fellow members teasing. It’s all in very good fun and engenders a spirit excitement when we meet for the monthly draw at the different pubs in the villages.”