Following Lydia Robinson’s move from the Pensford to take up fresh challenges in her successful architectural career, the reins for the heritage restoration project have been handed over to the remaining team, Janette Stephenson, Nick King and Meg Thomas.

Many residents will have seen the progress with village post opposite the Pensford War Memorial now fully refurbished displaying its four elegant fingers. All the cluttering signage has been repositioned so that the beautiful post can be clearly seen. 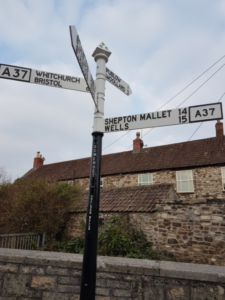 The restoration team are thrilled with the result even if it has taken longer than originally anticipated. Janette Stephenson explained that the foundries are very busy but their standard of work will ensure longevity especially those on the A37.

A Fundraising event will be hosted by Meg Thomas at The Grange, Belluton on Sunday 18th March from 6 – 8pm.

The PPSCT has already donated £1500 to the project which added to £2060 raised has helped the project progress thus far.

Janette reported that, “where fingers are missing or badly damaged, this is fairly expensive iron monger work to fund.”

We will keep you “posted” on further developments.