In Memory of Acker Bilk

Acker Bilk to be remembered in Pensford by the Community Trust, Parish Council and Music Festival with the help of local craftsman and his father.

Pensford, Publow and the Stantons Community Trust, has joined together with Publow and Pensford Parish Council, the Pensford Music Festival and John Tyler to commission a bespoke stone seat in memory of Bernard Stanley “Acker” Bilk MBE who sadly died in November 2014. Acker was a celebrated internationally known jazz musician, especially dear to Pensford where he was born in 1929 and to where he returned to live with his wife Jean, in later life. He was well known for such lasting favourites as “Stranger on the Shore” and fondly remembered locally for his fabulous appearances at the Pensford Music Festival, generously helping to raise funds for local community good causes.

Andrew Hillman, Chairman of the Community Trust said, “locally there was a strong desire to commemorate Acker in some way so the Parish Council collaborated with Paul Hunt and Alan Ford of the Pensford Music Festival which has resulted in the idea of commissioning a bespoke handmade stone bench . It was felt that investing in stone would be a substantial, and long lasting commemoration and appointing a local craftsman talent would be an appropriate way to reflect Acker’s own musical talent.” Andrew went on to say, “The Community Trust was approached by Janette Stephenson, Chair of the Publow with Pensford Parish council and fellow Trustee, to contribute £1200 to match the funds raised by The Parish Council of £1200, Pensford Music Festival £1300 and John Tyler’s support of a further £300.We understand that Acker’s wife, Jean, is delighted with the prospect, and as The Community Trust the Trustees felt it appropriate to help remember our local treasure and all he did for his community. Not only that, the residents of Pensford will benefit from the facility and a local craftsman will have an opportunity to use their skill in a very positive way.”

John Tyler’s son, George Tyler has been appointed to design and craft the bench. His workshop and showroom, which exhibits some of his contemporary sculptures, is based in JAT Environmental Reclamation Yard, Pensford. The commission is a major project for George who said “I feel privileged to have been commissioned for this special piece of work, it is a real honour. I thoroughly enjoyed the Pensford Music Festival and I think it is fantastic that the Pensford community will be able to remember Acker and his ability to make his clarinet speak into the hearts and minds of people who heard him play – to be a part of remembering him in a small way is amazing.”

Trustees of the Community Trust Andrew Hillman, Janette Stephenson and Sue Osborne visited George to see how his design was progressing.  Andrew said, “George has mocked up the bench in plywood which comprises both bench ends plus a centre section to make sure the size and shape of the bench will be in proportion and that it will be as comfortable as possible. We were also amazed to see that he had built a grinding, routing and polishing machine for this specific job!”

George explained that he had attended Chew Valley School but had found school life a challenge, he said, “I basically didn’t get it, there wasn’t a subject that I can say I really enjoyed.  But when I started to work with contemporary structural design, stone masonry, fine carving and engineering I found my passion. For this commission I have designed and built my own engineering machine which is my version of a swiss army knife although much larger of course! This will help me with the scale of this project which would otherwise have been very time consuming.”  George guided the Trustees around some of his work and carvings, and went on to explain, “I will be using Grey Russian granite for the bench, 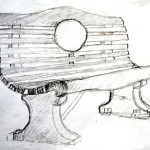 which is strong and extremely dense which means it won’t tarnish or weather and will retain the beautiful shine that can be achieved. The frame, braces and ground fittings will be stainless steel and the slats will be hardwood like mahogany or jarrah which are much less prone to rotting and therefore have much lower maintenance costs. Where needed, I will be using all local suppliers”.

George expects to finish the commission sometime during the summer and it is proposed that it will it will be placed to the side of the Pensford Lock Up opposite the Village Green. Janette Stephenson said, “at the moment it is likely the existing bench will be moved to Culvery Wood and Acker’s bench will take pride of place in the heart of the village so that he will be continually remembered. A very important part of the bench is the plaque which will clearly display the commemoration to Acker and who commissioned it. At the moment it is proposed the plaque will be a black granite circle, highly polished, engraved and painted with gold leaf to make it stand out.”

Janette went on to say, “we are very excited to see the end result, which in itself will be a piece of artwork for Pensford designed to last and for everyone’s enjoyment and to keep Acker’s memory alive for the decades to come. Watch this space…there will be a Parish tea party to celebrate the unveiling of Acker’s bench, to which everyone will be invited”.

If you would like to learn more about George Tyler visit his Facebook page –G Tyler Design, or his show area based in JAT in Pensford.

If you would like further information about how to help, or apply for a grant from the Pensford, Publow and the Stantons Community Trust, information can found at here . The PPSCT is a registered charity and any donations may be made with the additional benefit of GiftAid. 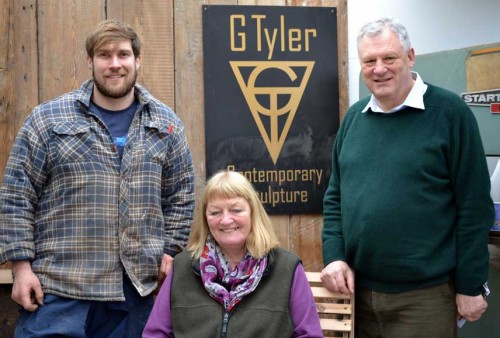